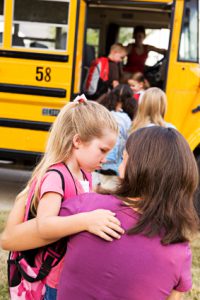 As a parent, have you ever felt this way about your kids? The “Jekyll” child you’re used to around the house suddenly becomes Hyde and turns the whole household dynamic on its ear for awhile. Or you sit down at a parent-teacher conference to think the teacher must have the wrong file in front of her, because it certainly doesn’t seem like she’s describing your child. At least, not the child you live with.

Chances are, if your child is acting out of character, there’s something called reversal theory at play. For me, this is one of the most interesting aspects of personality type theory. When people—especially kids—get stressed out, they literally “flip out” from a temperament perspective. For instance, if your child is really anxious about something, instead of being the analytical kid you know and love that sees decisions in black-and-white, the landscape will become a gray area and he’ll be overly emotional and sensitive. Or your intuitive daughter will go from seeing the broad strokes of life like an impressionist painter to craving the super sensory that keeps her purely in the moment—whether it be rubbing a favorite blanket or being overly sensitive to fabrics and clothing tags or wanting to devour everything sweet in the house.

Here are the most common ways that the different personality types react to situations under “normal” circumstances and under stress:

You’ll notice in this chart that the thinkers and feelers tend to pendulum swing MOST in the area of extraversion or introversion. So, often the sign of stress in these kids can manifest as talkative kids withdrawing or reflective kids talking a mile a minute.

For sensing and intuitive kids, however, they pendulum swing MOST in the judging/perceiving aspects of their personalities. Perceiving kids that typically enjoy the journey will crave a game plan and fly into a tizzy if things don’t go according to plan. Judging kids who typically like to reach a conclusion as soon as humanly possible will get nervous about any potential directions they haven’t explored yet and stay in the realm of possibilities much longer than normal.

If your child’s teacher describes a child during your parent-teacher conference that seems completely different than the child you know and love on the home front, take this as a cue that he may be stressed out at school. Instead of accusing him of acting out, being lazy, or not doing his best, take him out for a special one-on-one time. Say something like, “you know, the student that Mr.                 described to me during our conference isn’t the person I know at home. Is something bothering you at school?” Try to get to the root of the problem. It may be anxiety related to his performance in class. It could be a queen bee in the classroom that makes your daughter feel uncomfortable. It may be a general feeling that he’s just not as smart as the other kids.

As soon as you can get to the root of the problem(s), you can become a team and start figuring out a game plan to help her solve her challenges. If it’s a challenge that you never had to deal with as a child, ask permission to recruit another team member that may have better insight into what works and what doesn’t work. If you didn’t experience the same problem as a kid, don’t offer canned suggestions because if the suggestions don’t work, he’s much less likely to come to you for strategies and solutions in the future.

Once the underlying problems are addressed—or, at least, he sees a potential light at the end of the tunnel—chances are good that your child in “Hyde”-ing will return to the kiddo you know and love…both at home and in the classroom.

Who Are You and What Have You Done With My Child?